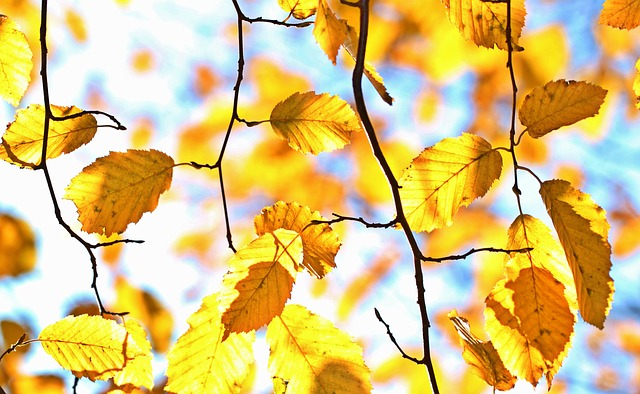 My first blog post on “Kicking and Screaming” is ready for your viewing pleasure..enjoy!

Time to get out of the house and take advantage of this beautiful Michigan fall weather.  We hit the road on a sunny and breezy Sunday morning and headed northeast toward the city of Port Huron, and as they used to say in the south – “right smack dab” on beautiful Lake Huron.  The lake was rough and the wind was blowing at a constant of 19mph with an air temperature of 60 degrees, but that didn’t stop a few hardy souls from sailing, nor a family hoping to climb a lighthouse.

Our only stop that day was  Fort Gratiot Lighthouse . One of my goals this next year is to visit as many Michigan lighthouses and National Parks as possible – hence, I have no choice but to get out of my house.  Can’t guarantee what I’ll be able to do during the winter months here in the “balmy” mitten, but I’ll give it the old college try.

We were able to catch the next tour and it’s a good thing we did as we would not have been able to enter the buildings without our official wristbands.   Our tour guide, Mike, was retired from the U.S. Coast Guard, and loving life giving tours of this beautiful landmark.  We learned quickly that Mike did not carry the “PC” gene, which at times, can be rather refreshing.  Just an old salty sailor, I guess.  Oh, and Gratiot is pronounced “grashut”; the middle “t” is silent.  You do not want to get this wrong in front of Mike.

In case you appear on Jeopardy someday, here are some quick facts about this grand lighthouse.  I’m going to give lighthouses the female tense as they are powerful structures who bring light and comfort to those on the water.  SHE was the first lighthouse built in Michigan in 1829, just north of Fort Gratiot.  The Light marks the entrance to the St. Clair River from Lake Huron (going south) in the southern portion of the Michigan thumb.  The light is still active and the grounds are an active Coast Guard facility.  The tower was originally 32 feet high.  In 1861, after two additions, the tower reached its current height of 82 feet.  Let me repeat that – 82 feet high. 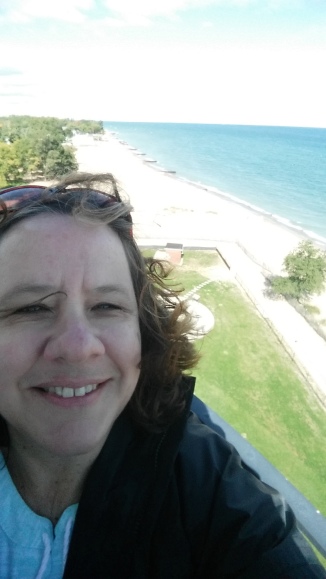 94 STEPS.  Doesn’t seem like much to you aerobics type people, but when you’re performing a steep climb of skinny, old metal steps and going round and round, it’s not for the faint of heart.   I lost count and my sense of balance after 40 steps, but made it to the top after a few rest stops.  What a great work out if you had to do this a few times a day.  The viewing area was only a few feet wide – another reason to not look down or move around too much.

I took some great shots while up in the air 82 feet!  Here’s Dave with one of two freighters that we saw that day.  It was tough on everyone up there.  Especially with the high winds. 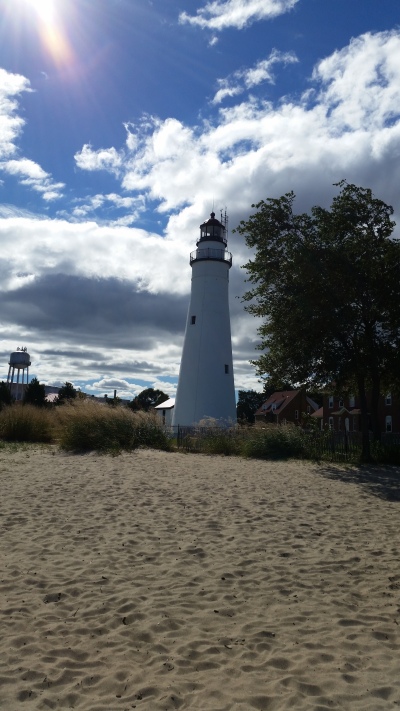 After climbing down 94 steps, we took a nice walk down the beach.  Between the climbing, the wind and the lake air, we were ready to call it a day.

A very successful and worthwhile visit for this family.  Thank you Port Huron Museum for maintaining and loving this beautiful landmark and thank you Fort Gratiot lighthouse for your service.

So far, I’m loving this getting outside thing!  Until next time… Margaret