Ah Groupon.  How you taunt me with your deals.  Making me anxious about the expiration date and small print yet pulling me in with just one more.  As a newcomer to the world of adventure, the Groupon site has become a favorite for me, allowing me to see what is out there to explore at a bargain price.  Now I’ve been warned since we arrived in March not to go to Detroit, and if I did decide to go, to take someone who is familiar with the area.  So what do I do?  I buy a Groupon for the Whitney mansion in midtown Detroit and schlep my 90 year mother with me.  So there.  You go Detroit!  Seriously though, you do need to be careful.

It took me awhile to decide how to approach writing about this trip.  My pictures don’t do justice to the Whitney nor to the Woodward Avenue area.  More so, my mother is at a point where her memory is not good, and she needs to be watched when in unfamiliar areas.  So running around a large mansion and out onto the street are not picture taking options for me on this adventure.   She would be mortified that I am writing this but I’m not a syndicated columnist, at least not yet, and I doubt anyone reading this is going to pick up the phone, call my mom and tell on me.  She is almost 91, “healthy as a horse” but the mind is going.  It’s sad to watch and be a part of, but no one said getting old would be easy.  So I do the best I can, answering her questions over and over and making sure she doesn’t take a wrong turn.

The Groupon that I purchased was for a Champagne Tour and High Tea for Two at the Whitney, and it did not disappoint.  Some background:  The Whitney House was built by successful lumber baron David Whitney Jr., one of Michigan’s wealthiest citizens and the wealthiest man in Detroit. He was worth more than $15 million at the time of his death in 1900 — about $388 million today, when adjusted for inflation.  Work began on the home in 1890. It was estimated to have cost $400,000 (about $9.5 million today) and was featured in several newspapers of the time. The Whitney mansion is 22,000 square feet and has 52 rooms (including 10 bathrooms), 218 windows, 20 fireplaces and numerous stained-glass windows crafted by Tiffany’s of New York.  It was the first residential home in Detroit to have an elevator for personal use, a hydraulic number. The Whitneys spent an additional $250,000 ($6.2 million today) on decorating and furnishing the home and another $300,000 ($7.5 million today) on artwork from around the world.

Do me a favor and click on this link – I think that you’ll really enjoy the professional pictures of this grand old mansion….  Historic Photos of the Whitney mansion.

Let’s get to some of my photos… 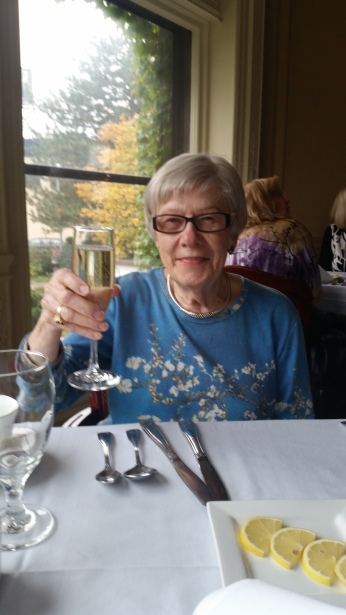 The start of our champagne tour.  Mom enjoying some bubbly at 1:00 in the afternoon.  Sacrilege – but who cares, she’s 90. 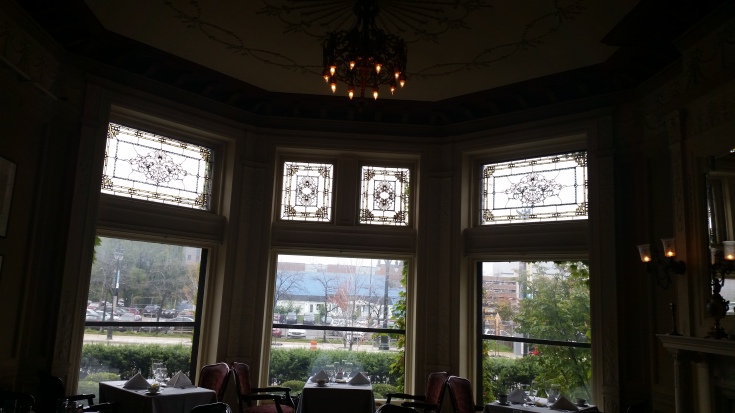 Our view out onto Woodward Avenue while dining on delicious scones and tea sandwiches. 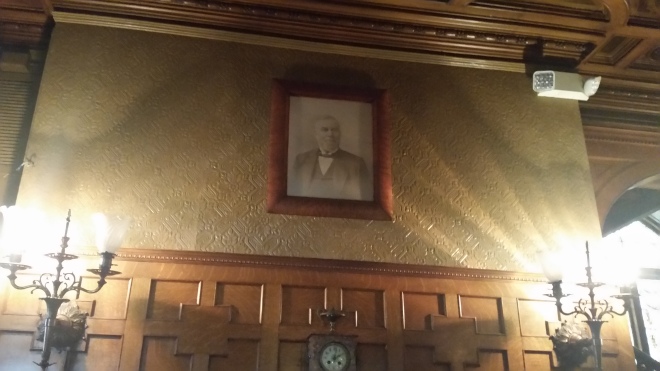 The man himself, David Whitney Jr. 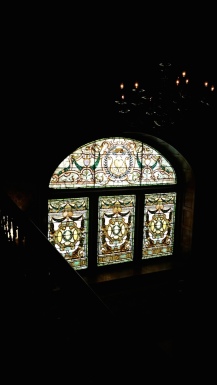 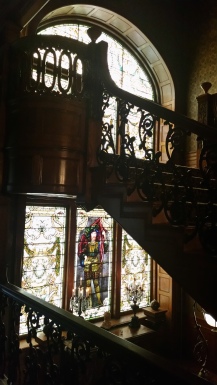 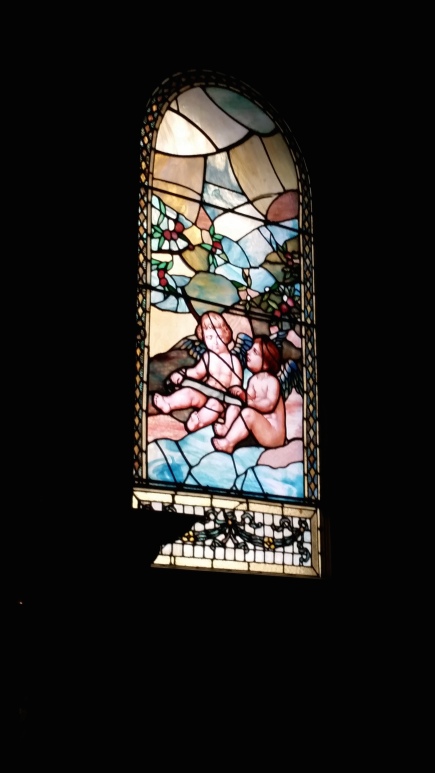 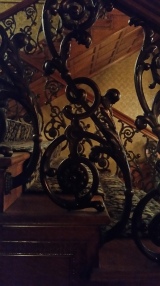 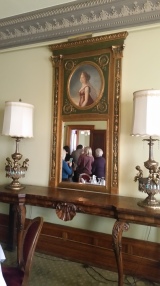 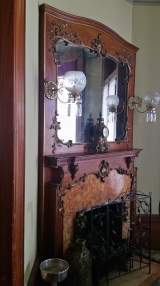 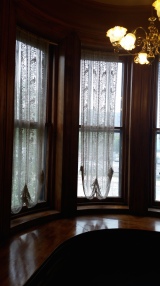 The woodwork was absolutely magnificent – but then what would you expect from a lumber baron? 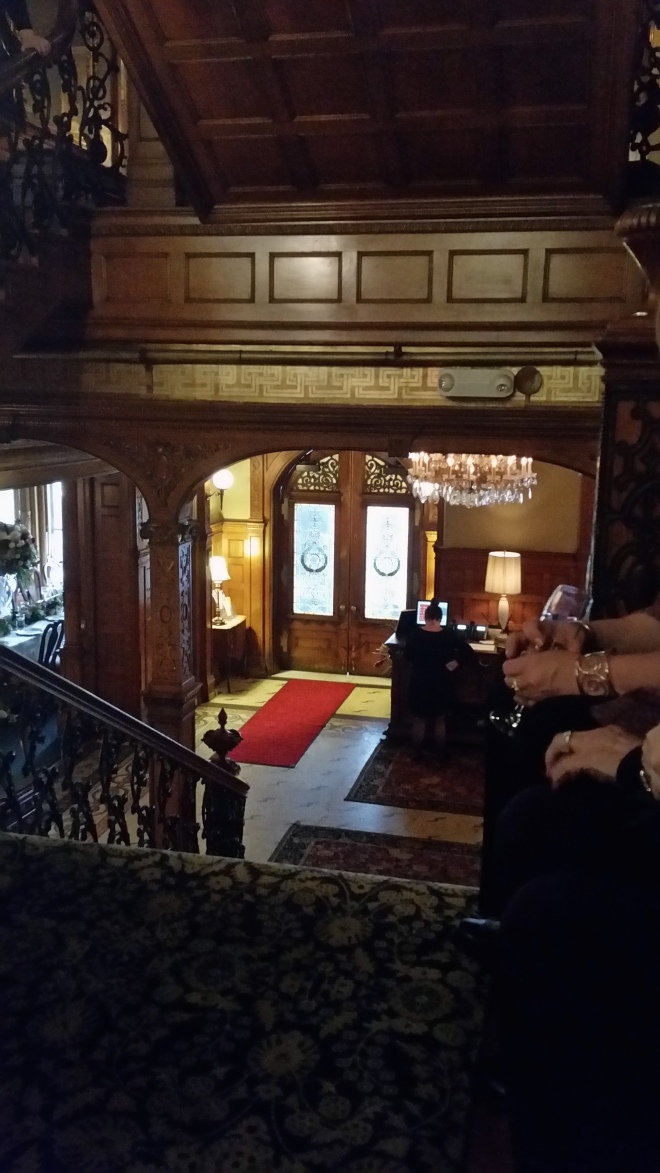 Entry way into the mansion off of Woodward Avenue.  Imagine the parties! 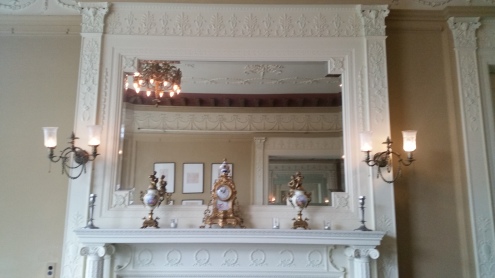 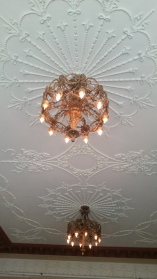 What a great way to spend an afternoon!  The tour and tea were well worth the drive into Detroit.  Woodward Avenue is full of history and is definitely a place that I need to return to in the near future.  Now that I know the way.

Cheers everyone – have a fabulous week!  Thanks for visiting and I’ll talk to you soon….

“Thank you for your service.”

I try to remember to say this phrase when I meet someone currently serving in our military or who served in the past.   I said it quite a bit at the 50th Anniversary of the Vietnam War Commemoration meeting hosted by my DAR chapter last Saturday.  I’m so proud to be a member of the Stoney Creek Chapter of the Daughters of the American Revolution, especially after attending this event.  This chapter not only understands the meaning of service but puts it into action. 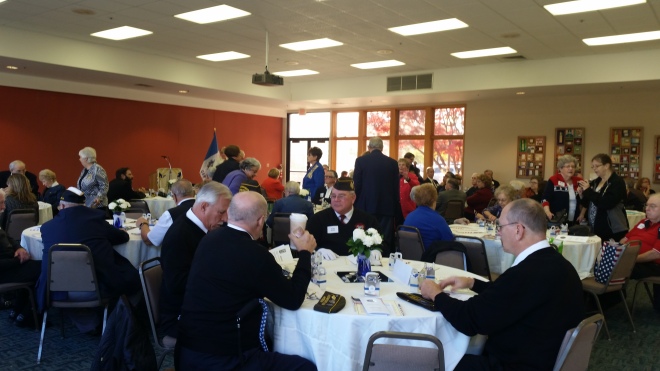 On May 25, 2012, President Obama signed a proclamation reading that the Federal government will partner with local governments, communities and private organizations across America to participate in the Commemoration of the 50th Anniversary of the Vietnam War – a 13 year program to honor and give thanks to a generation of proud Americans who saw our country through one of the most challenging missions we have ever faced.  Throughout this Commemoration, let us strive to live up to their example by showing our Vietnam veterans, their families, and all who have served the fullest respect and support of a grateful Nation.  The DAR meeting that I attended on Saturday was just one of what I hope were thousands of events planned to honor these veterans over a 13 year span. 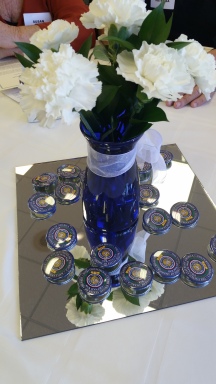 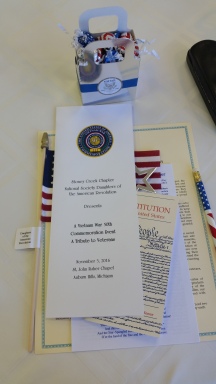 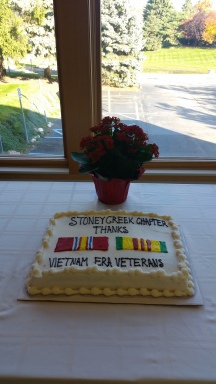 I sat and watched each of these veterans receive a framed certificate and lapel pin.  There were about 50 veterans in attendance, mainly those who served in Vietnam, but also Iraq, Korea and even one from WWII.  Some walked up, some used a wheelchair, some used a cane.  But they all walked up grateful for the recognition and accepted the small tokens of appreciation with pride.  As I watched them come up, I wondered what their experiences entailed… were they career military?  Were they drafted or did they join?  What did they witness while serving?  How were they treated when they returned?  One Vietnam veteran who led the the color guard during the ceremony, stood up, thanked the DAR profusely for holding this event and for helping him forget being spit on at O’Hare airport when he returned from the war.  I’m sure he was not the only one in the room that this happened to. 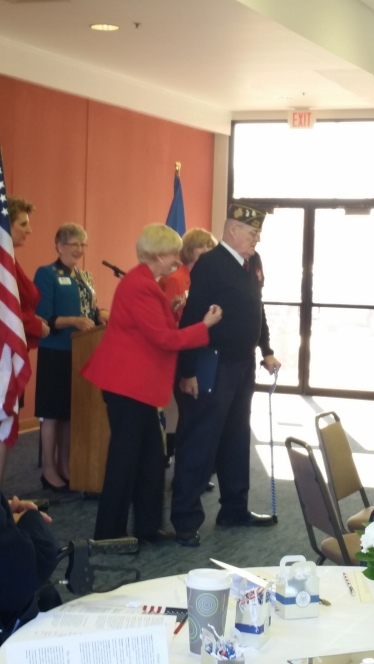 And then I thought how wonderful it would be to watch my dad, uncle (Dick) and aunt (Betty), who all served in WWII, be recognized as well.  I know they would have enjoyed being with this group, and selfishly, I would love to see them one more time.  But life marches on.

The guest speaker was John R. Todd, J.D. – Professor of Business Law, Rochester College and Vietnam Veteran (sorry for the blurry picture; this speaker was wonderful)! 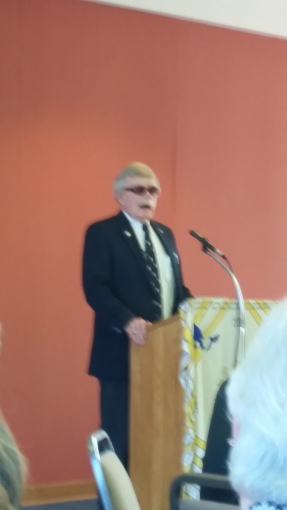 Mr. Todd was shot down twice in Vietnam resulting in life-changing injuries. In his words, “I count myself extremely blessed that I survived that afternoon in January, 1969, extremely fortunate that I had a chance to go to Vietnam and fight for a cause that I believed in”.  Todd was awarded the Distinguished Flying Cross for Valor, combat air medals, the Cross of Gallantry with Bronze Star and the Purple Heart for his service. He spoke out as part of a group called ‘Vietnam Vets for a Just Peace’ and in 1972 testified before a platform committee in Washington.

His presentation was thoughtful and eye opening from a veteran’s point of view.  My favorite part of his talk was at the beginning where he referenced a song by Eric Burdon and The Animals.  He did not say the title of the song but asked the veterans to start singing.  They all knew what he was talking about and did us the honor of singing the most popular verse – “we gotta get out of this place…”.

We Gotta Get Out of This Place 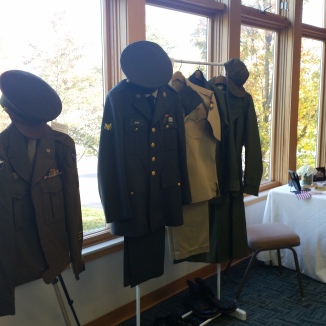 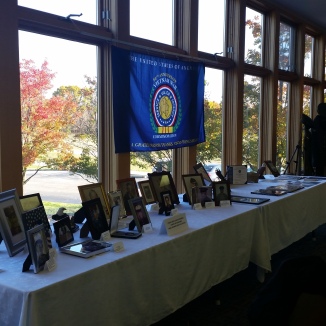 What a wonderful and inspiring event.  But it made me think – saying thank you for your service is no where near enough.  It’s a start, but as I read more and more about the increasing number of suicides by veterans and the frustration with veterans’  medical and psychological care, we as a country are falling way short.  I would hate to think that “thank you for your service” becomes one of those phrases that we throw out automatically like “thoughts and prayers” and “love you to the moon and back”.

Veterans Day is Friday, November 11, but in my mind, every day is Veterans day.  I’ve got some thinking to do.